Diabetes is a huge illness that plagues the entire population. In the 21st century itself, the number of diabetic people has increased significantly compared to other centuries. It is a clear trait that the rapidly changing lifestyle is one of the biggest reasons for this to happen.

When it comes to Diabetes, three major types cause trouble to everyone:

In the case of Type I diabetes, the pancreas in our body stops producing insulin altogether. However, Type II Diabetes is a case where our lifestyle results in troubles. At the same time, diabetes isn’t the only thing that positively affects our lives

It leads to troubles in other internal organs as well. Multiple organ failures are very common in diabetic patients in extreme cases.

Diabetic Complications may range from being acute to being incredibly chronic. The most commonly affected due to diabetes is certainly the kidneys. Kidneys help in purifying our blood from excessive salts and other minerals.

Thus, purifying the already glucose-abundant blood consistently takes a toll on both organs. Apart from that, here are the common diabetic complications associated with the human body: 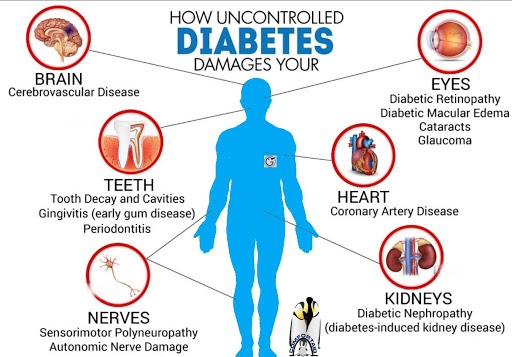 These range from being acute to chronic, as mentioned above. However, the common factor among all of these is that most of them are irreversible. It is important to check our blood sugar as well as insulin levels in times like these.

Being careless about the same will lead to severe life-threatening diseases which will not only immobilise you but increase your hospital bills significantly. Even for people who are already diabetic, keeping the levels under check should be the first priority so that they don’t have to face anything incredibly difficult in the future.

previousDiabetes Management in a Nutshell